Add anything here here or just remove it..

Artist Michael Temple calls his visual language “Lower-glyphics, symbols that don’t quite connect.” His free-flowing non-objective, abstract painting and geometric patterns invoke a visual rhythm. The lower-glyphic marks allow the viewer to make connections of a personal nature. Temple often works out of doors at his Los Angeles studio. “The natural light is perfect, there is lots of room to work, I can smoke out there, and bugs, dog hair and dirt may sometimes inhabit my work. No extra charge.”

Music While touring he took along water colors, gouche and kept a sketch pad. When home he paints larger works, preferring to work in oil. Sentences concerning his current favorite painters and galleries.

Shout out to his favorite artists. living or dead

Michael worked as a bandleader. He founded The Bonedaddys, one of the first American bands to be described as world beat. www.thebonedaddys.com

Michael earned a California Teaching Credential to work with children who have moderate to  severe disabilities. Michael enjoys working with this population because “They have good hearts and pure souls”. He did special education for 17 years. 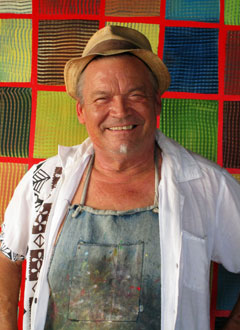